Daylio: mood-quantification for a less stressful you

Emotions and moods—what are they and why are they important? An emotion is a momentary reaction to a stimuli or an event, for example, we might feel the emotion of happiness for winning an award. A mood, on the other hand, is an emotional state that sustains from a shorter to a longer duration. Moods are not necessarily created in reaction to external events, but moods do influence our emotional responses to events. For example, elevated moods are prone to reacting positively to external stimuli.

Unfortunately, at times people get trapped within certain negative emotions such as irritability, anger, tiredness, pessimism etc. for an extended time period, mainly due to chemical imbalances in their brains. It is likely for such states to go undetected. Sometimes people are simply unwilling or ashamed to admit they have a problem. Ultimately, these moods can impact an individual’s quality of life, and lead to bigger problems such as thoughts of death or suicide. The self-quantification movement that advocates knowing oneself through numbers can come in handy here. In other words, quantifying one’s moods on regular basis can help one understand oneself better and identify existing or emerging problems.

There are many mobile applications available in mobile App stores that promote mood-quantification by allowing people to track their moods/emotions. One example of such an application is Daylio that uses a 5-point smiley system for mood-quantification. It encourages people to record their moods and activities on a daily basis. To make an entry, the user first selects a mood from Daylio’s smiley system (Figure 1), then they select activities around that mood, and finally they can record notes for more details (Figure 2). People can record their moods as many times as they want in one day. They can even customize the smiley system by replacing the existing icons with their own, and renaming those icons so ‘fugly’ can become ‘sad’ etc. (Figure 1). People can also customize the activity screen by adding their own activities and/or behaviors icons (Figure 2). 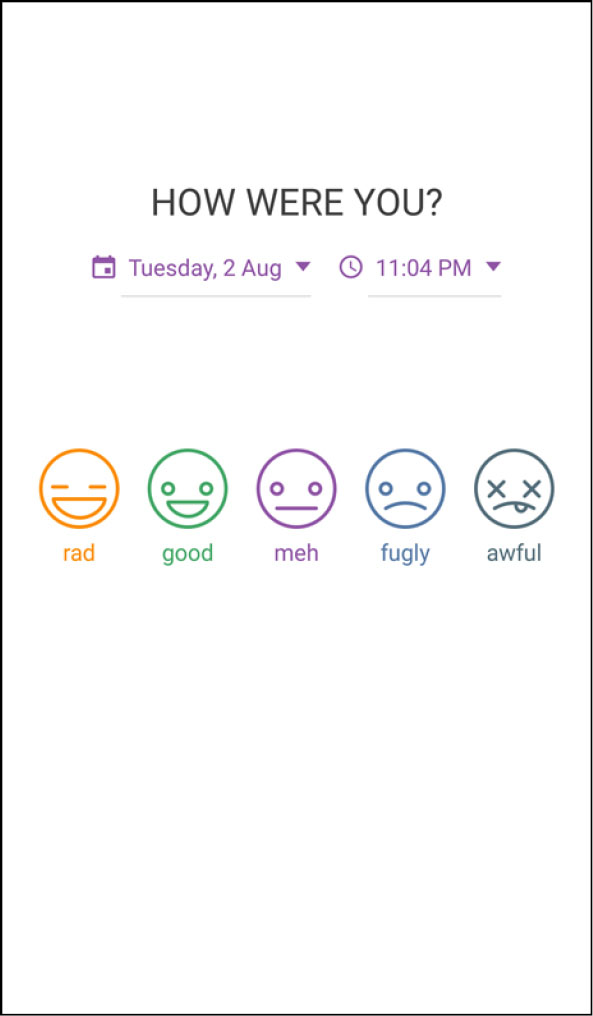 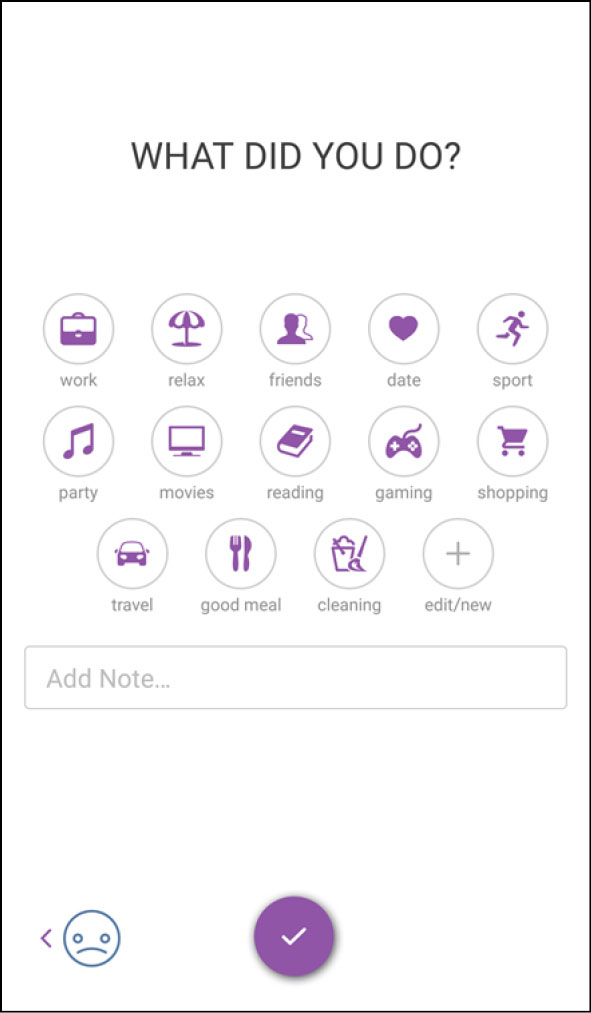 The simplistic interface design consisting of the ability to tap an icon to record a mood and an activity (if needed) is a major success of this application since it allows people to record what’s going on even when they are at their worst and without being overwhelmed. Hence, people can collect more data (especially when it is most useful) to identify triggers to specific moods and visualize trends better. Daylio also allows people to set alarms to be reminded to track moods and behaviors at certain times of the day. A reminder non-intrusively prompts the user to make an entry by displaying a banner with the 5-point smiley system on the phone screen.

To help people understand their moods from different perspectives, Daylio generates several views of all moods recorded over an extended time period. The linear aggregation of daily entries (Figure 3) enables people to visualize details of each recording in one glance. Daylio also automatically generates various statistics about recorded moods. For example, people can graphically visualize how their moods have been changing (either with respect to an activity or overall) over the course of a month (Figure 4). They can also see a summary of the numbers of times they experienced each mood on the 5-point system (Figure 4). Furthermore, people can also see how many times they performed each activity and what their best and worst days looked like (Figure 5). Finally, people can visualize their moods (in relationship with an activity or not) on a calendar where each day has color(s) of the smiley(s) that was recorded on that particular day (Figure 6). 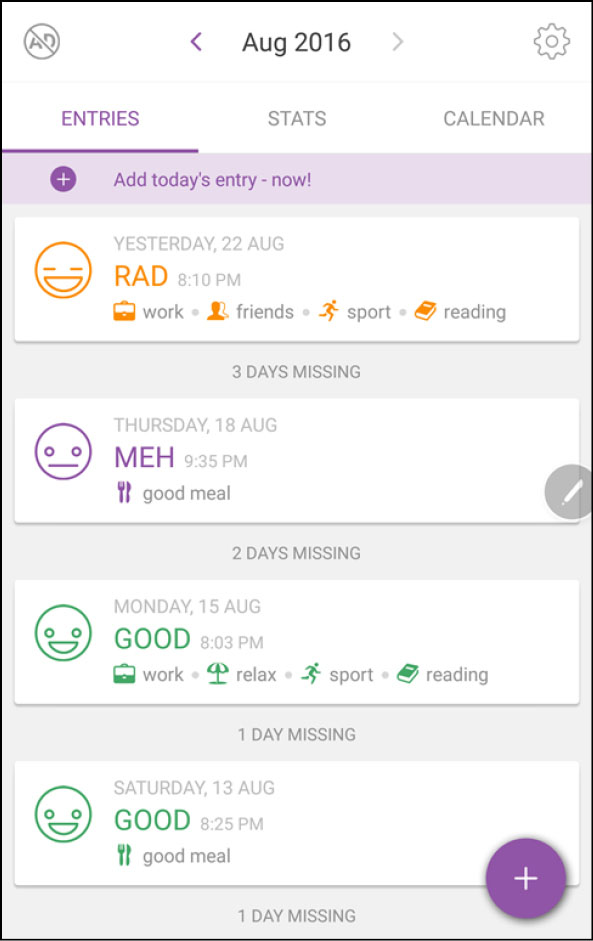 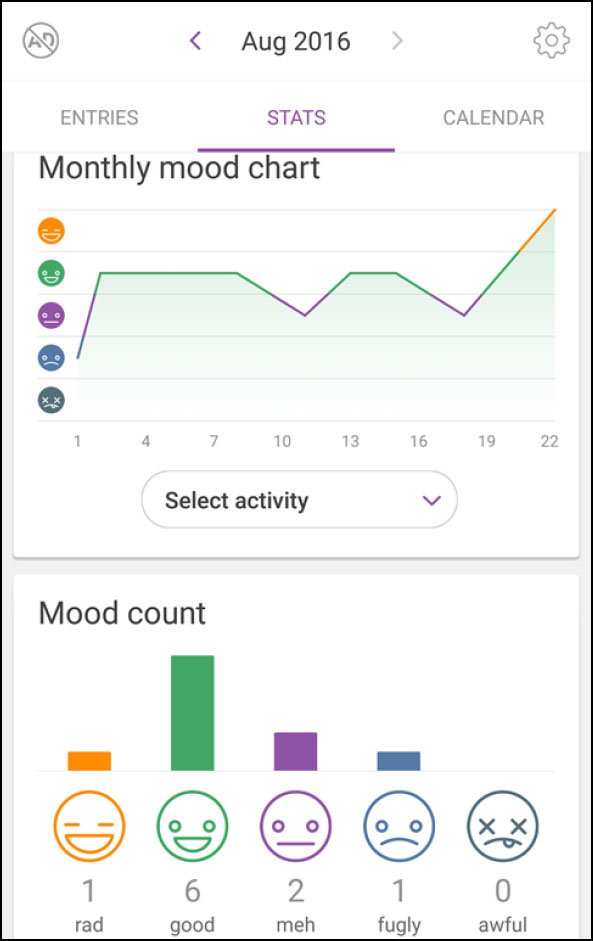 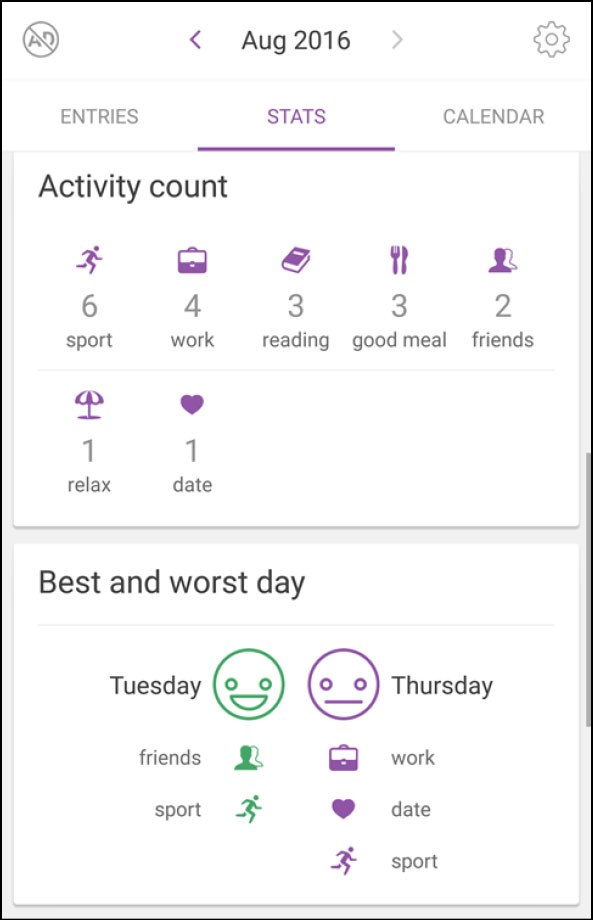 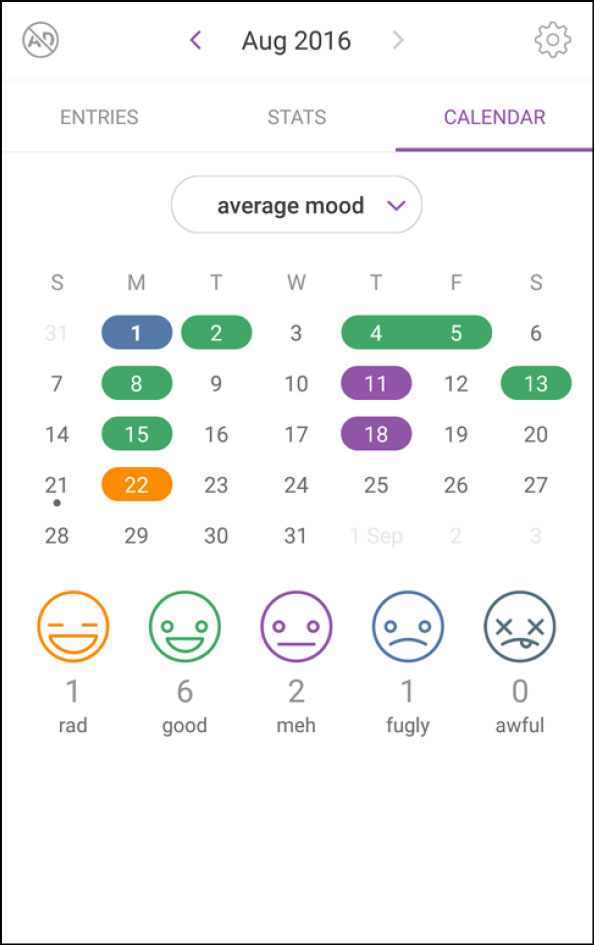 Mood-quantification applications can be useful in many ways. People who suffer from mood disorders such as depression, bipolar and anxiety can use such applications to have better understanding of their moods, for example, which activities trigger negative moods. Mood quantification can also help those who want to understand how a certain medication is affecting them. Women who want to track their moods and behaviors around their monthly cycles can also use this application. Finally, patients can share their mood data with their providers for diagnosis and better treatment decisions. Applications like Daylio may have several limitations but their simplicity can help people generate useful data that can lead to better understanding of problems and issues in the long run.

The author would like to thank Mood Tracker Lovers for letting her review their app Daylio.

Conflicts of Interest: The author has no conflicts of interest to declare.