Globally, it has been reported that as many as 36 million Lymphatic filariasis (LF) related scrotal hydrocoele and lymph-edema cases existed as of 2015 (1). Furthermore, it has been shown that for every 38.46 million people living with LF, 18.76 million exhibit complications that could require surgical intervention (2). Against this background is the shocking revelation of lack of timely access to surgical services among the victims who are left to suffer. There is a need to scale up and expand hydrocoele surgical services to reach victims who have limited access to the best treatment. Hydrocelectomy has been shown to be necessary and urgent given the benefits to the patients and communities (3). Just as in many low- and middle- income countries (LMICs), trained surgical capacity to handle this scale up and expansion of critically needed hydrocoele surgery was lacking in the three facilities (4). Surgical services in the three district hospitals were offered by non-physician clinicians (NPCs) and nurse anesthetists. Thus, reaching out to these patients has been through mass surgical camps bringing surgeons who would operate on hundreds of patients at a go (5) and leave without proper post-operative care and follow-up.

In Tanzania, hydrocoele is more prevalent in the coastal belt with thousands of cases unattended: about 39% of men have been reported to be affected (6). In 2008, the first mass hydrocoele surgeries camp was organized in Tanzania with training on the new sac excision technique whereby qualified surgeons were trained by West African surgeons. Rolling out this technique to NPCs has been shown to be necessary since each local authority in hydrocele endemic regions have been allocating resources for surgery annually since then. Without the roll out, NPCs would continue sac eversion which has been shown to carry 7% risk of recurrence (7). With challenges of non-sustainability of camps both to the treated patients and the program, involving NPCs was inevitable.

Since mobile connectivity has spread to rural regions and nearly all clinicians are using android based mobile phone, use of application that allows sharing of video and photos in real time would bridge the supervision gap following short training. But the efficacy of this has not been tested in real surgical practice hence we sought to try it.

This was a prospective cohort study in 2014–2015 done in the regions of Mtwara and Lindi in the southern coast of Tanzania where filarial hydrocele prevalence was high but with a serious lack of trained surgical providers. Three health facilities were selected based on availability of operating rooms, high burden of hydrocele in the coverage as reported by neglected tropical disease (NTD) coordinator and availability of at least an NPC to be trained. Through previous mapping effort by the area NTD coordinators for each catchment hospital, names of patients and their villages were available. Patients were recruited basing on: hydrocele which would not require scrotoplasty; with non-elephantoid scrotal skin; no coexisting hernia; no comorbidity and good mental health status to be able to tolerate local anesthesia. Local hospital existing consent procedure/form for surgery was used, and additional consent for photography and sharing of the pictures in the closed WhatsApp group was also obtained. Ethical clearance for this publication has been received from MUHAS IRB.

During the first encounter, didactic and practical training was conducted on site by Larry Akoko and Ally Mwanga. This was a 2–3 hours session that covered: patient selection, preoperative preparation, technique of partial sac excision and its rationale, and post-operative care. A protocol for step by step approach to surgery was developed and luminated for each site to be kept in operating room see Supplementary. Following the didactic sessions, practical session on patient selection, examination to rule our hernia and elephantoid skin was done. Demonstration cases were then selected from patients who were already admitted for surgery the previous day. The consultant performed surgery with each of the trainees followed by trainees being assisted by the trainer. Subsequently the trainees were assisting each other as a demonstration of mastery of step. A total of sixteen health personnel (two medical officers and 14 NPCs) who were surgically active were trained using the West African developed protocol (8).

Subsequently surgeries were to be carried out only on Saturdays and Sundays with prior notification of the consultant. This was meant to ensure a consultant allocates time, allow steady learning by avoiding the stress associated with camps, providing quality care while allowing time for reflection. At the site, providers would screen patients for eligibility, obtain consent for photography and obtain photography of the scrotum, share photos on the WhatsApp platform for group discussion and final approval. Frequently, on table decisions would be shared by WhatsApp, like when testicular viability was questionable and there was uncertainty on performing or not performing orchidectomy. On post-operative period, photos would be shared again if the provider feels there is a complication for the consultant to be able to male decision. This was followed for the entire camp program period. Patients who had scrotal hydrocele but were did not meet inclusion criteria were recalled to be seen in person by the consultant during the ad hoc site visits for a plan of care.

Patients were admitted for five days and there after followed up to 30 days. Effectiveness of the strategy was assessed based on number of surgeries completed, duration of each procedure in minutes, rate of hematoma formation, and strict adherence to the local anesthesia. These are presented as rates in the table below.

From Table 1, summary of procedure dynamics is presented. A total of 1,337 hydroceles were performed by 16 NPCs: 387 cases had bilateral disease. Local anesthesia was used in nearly all patients with only two using ketamine primarily and one needing ketamine as add-on anesthesia. Mean blood loss related to surgery and procedure duration were 92.26±1.34 mL and 50.2±0.24 minutes respectively. Complications were reported in 27 (2.16%) of the cases with hematoma and surgical site infection (SSI) occurring contributing to 63% and 37% respectively. Only 7 (0.6%) of the patients needed additional procedure of which orchiectomy was performed in the majority, 6 (85.7%) due to none viability of the testes. 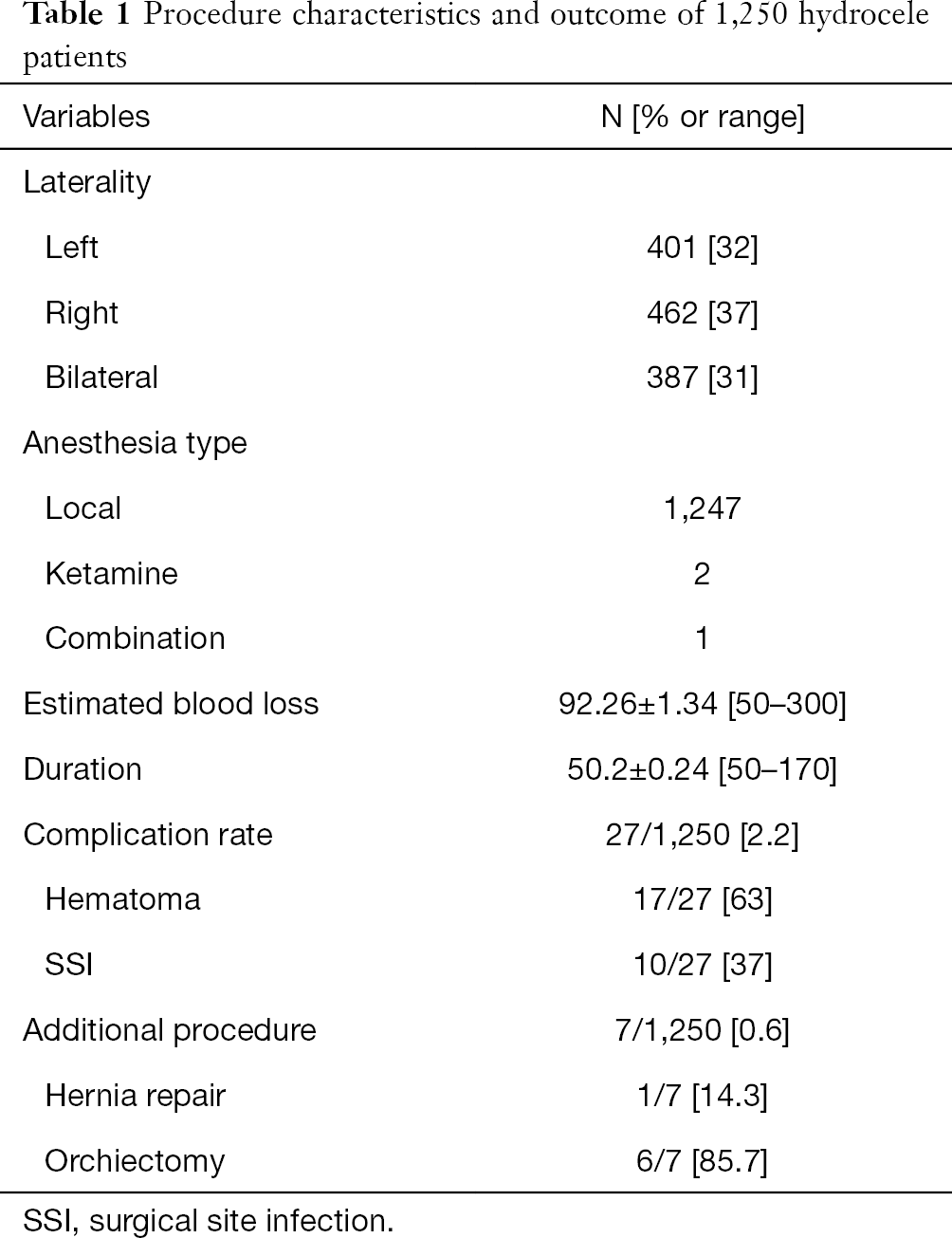 This is the first study in Tanzania to assess the role of mobile phone use in mentored supervision of surgical activity in district and regional hospitals in areas with no trained surgeons. A single procedure of public health significance to the regions was selected as we believed that repeated actions would lead to mastery of skills even when the procedure was new to the providers. Ethical issues that were addressed in this study were mainly three: the use of mobile technology was between provider to provider and not provider to patient. This would ensure that patients meet the local providers and not the remote providers hence building patient-provider relations that was necessary for continuum of care. Secondly, photo acquisition was limited to below the waist line to avoid patient identification but yet provide detailed clinical picture of the organ/part under consideration. Third, NPCs are an integral part of surgical care provision in Tanzania where there are no trained surgeons hence involving them did not require approval. Actually, the NPCs were already performing hydrocelectomy but not through the new technique of sac excision which we sought to standardize. Hydrocele surgery has been performed by these providers using the sac eversion technique which they all acknowledged did not give better cosmetic results as compared to the newer sac excision technique. The providers had acknowledged that in many instances, the scrotum would remain redundant as if no surgery had been performed though they had not reported it as a recurrence. Therefore, data on superiority of the new technique is one of hypothesis given the scrotal sizes seen here.

The concern with the new technique were its three critical steps which were all different from the familiar sac eversion technique. First was the infiltration of local anesthesia, which would only work well in small and medium sized hydroceles; secondly, median raphe incision which is an avascular plane with minimal blood loss; and lastly was the sac excision taking care not to injure the spermatic cord. These steps are critical and time consuming hence needed close supervision and motivation from the providers to adhere to. To ensure all the three steps were followed, proper adherence to patient selection was followed and any small doubt on the provided photograph would mean patient exclusion. WhatsApp photos provided clear pictures to be able to tell whether scrotoplasty would be needed and on the status of the skin (presence or absence of elephantoid features). No patient was taken for surgery without the consultant approval direct approval which was documented and a case number was assigned for physical verification at the time of subsequent site visit.

Intraoperative mentorship and crucial decision making were also supported by the app interface. Still photos were taken for each patient at completion of partial sac excision step and the last at end skin closure. These two were crucial in ensuring that sac excision had been completed and entry was through median raphe. In some few patients, decision was to be made when testes viability was questionable. Such decisions needed direct instant communication which was made by video call and or short discussion on messaging accompanied by a photograph of the circumstances. When decision was reached to remove the testes, the reason was documented and kept in the patient’s case notes that were kept in the facility to be reviewed by consultant at next site visit. Post-operative hematoma was known to occur and would vary in severity. Our previous experience had indicated that majority of such hematoma did not need any surgical evacuation. Hence it was vital to guide the NPCs through the post-operative period and scrotal photos were taken of all patient’s days 1, 2 and 3. Subsequent photos were based on when the local providers felt they wanted to make any intervention hence needed approval.

With 1,250 cases operated over a stretched 2-year period, this would have taken 125 days of surgical camps. Even though camps have been proven to have a significant role in moving surgical services to the people (9), major disadvantage were absence from work and family for the camp team and massive payments in per diems for simpler cases that can be handled by the local teams with modest financial support. This study provides a model for task sharing rather than shifting through constant consultation and support which is critically needed in serving the underprivileged populations. However, countries should neither turn their back on training surgeons nor abandon the inclusion of NPCs in the surgical space. This study has just demonstrated the significance of supervision in task sharing model and can be applied across other surgical conditions. It is time consuming, needs working relationship of the kind of mentor-mentee, and needs availability of internet connection.

The use of WhatsApp mobile technology in the form of text messaging, still photos and video calling can be an effective way of offering real time support and supervision of training during surgical service provision. Other programs can test the usability of this technique in single disease entity that has backlog to be cleared in places with no trained surgeons.

We are grateful to the clinicians in the three hospitals of Newala, Nachingwea and Mtwara regional hospitals, the first two being in Lindi region. IMA World Health staff for providing constant support during the study just to name Josah Magunda and Juliana Mawi. Last to district NTD coordinators in the three districts for mobilizing patients.

This study was funded by IMA World Health, which covered patients costs and consultants travel costs.

Ethical Statement: Ethical approval for publication was obtained from MUHAS IRB (No. DA.287/298/01A). This study was embedded on service delivery hence consent for surgery was routine and separate consent to have photo taken and shared within the treatment team was obtained. Personal identifiers were deidentified during the data analysis point. The authors are accountable for all aspects of the work in ensuring that questions related to the accuracy or integrity of any part of the work are appropriately investigated and resolved.