Efforts to reach adolescents and young adults with health messages have been challenging in public health (1). However, there has been recently documented success in engaging these audiences with social media and online videos, which has increased in the past decade, especially among 18–29 years old regardless of race and ethnicity (2-4). Social media sites can provide a space for to engage users in dialogue, build or engage communities on specific topics, and encourage individuals to interact with one another about information pertaining to disease prevention, early detection, treatment, and survivorship (5,6). These sites enable users to share information in a timely manner and empower them to make health decisions informed by contributions of other visitors (6). Social media sites, including Facebook that has over 1.65 billion users (7), allows for an increase in the bidirectional flow of information, specifically regarding health information (8).

As familiarity with digital media has developed for those planning and implementing campaigns, an increasing number of health communicators are using social media as a part of communications strategy (9,10), but there are limited measurement methods used to understand the communication landscape and to critically assess intervention effectiveness (11). Some studies have described how social media are changing health communication in public health settings, including those that focus on cancer-related information (11-13).

In 2009, the Centers for Disease Control and Prevention (CDC) launched initiatives to increase knowledge of breast health and breast cancer among women, particularly among those under age 45 and those at higher risk for developing the disease. Efforts focused, in part, on the development of social media, public education campaigns that targeted young women with increased risk for developing the disease. CDC launched the Know:BRCA and Bring Your Brave (14,15) social media campaigns to educate young women about breast health and risk factors for early onset breast cancer. Know:BRCA focused primarily on factors related to hereditary breast and ovarian cancer (HBOC), promoting the Know:BRCA (13) web tool for young women to use to assess their personal risk for carrying BRCA1/2 gene mutations. The Bring Your Brave campaign tells real stories via photos and videos about young women whose lives have been affected by breast cancer in an effort to inspire young women to learn their risk for breast cancer, talk with their health care provider about their risk, and live a healthy lifestyle (14).

In this study, we sought to understand the impact of social media content type on Facebook user engagement for the Know:BRCA and Bring Your Brave public education campaigns.

Analytics data (N=574 posts) from the CDC Breast Cancer Facebook page for the time periods August 2014 to mid-April 2016 were used. We reviewed engagement rate based on whether a post utilized campaign content, the type of post (video, status/link, and photos), time of day, and year posted. Engagement rate was calculated by dividing the number of unique users that liked, clicked, shared, and or commented by the number of unique users reached.

Linear regression was used to model the effect of campaign content [coded as “Know:BRCA”, “Bring Your Brave”, and “Non-Campaign” (referent category)] and content type [“Photo”, “Video (including YouTube link)”, “Link/Status” (referent category)] on engagement rate. Links and status updates were grouped together given similar characteristics. No gross violations of assumptions were detected.

Given that time of day and year were related to engagement rate, campaign versus non-campaign content, and media type, we controlled for these variables (treated as categorical variables). As day of the week was not related to either engagement rate or campaign content, we did not include day of the week in final models. An alpha of 0.05 was used for all tests, and no co-linearity problems were detected.

The final model used was:

These data were analyzed using the R environment for statistical computing (16). 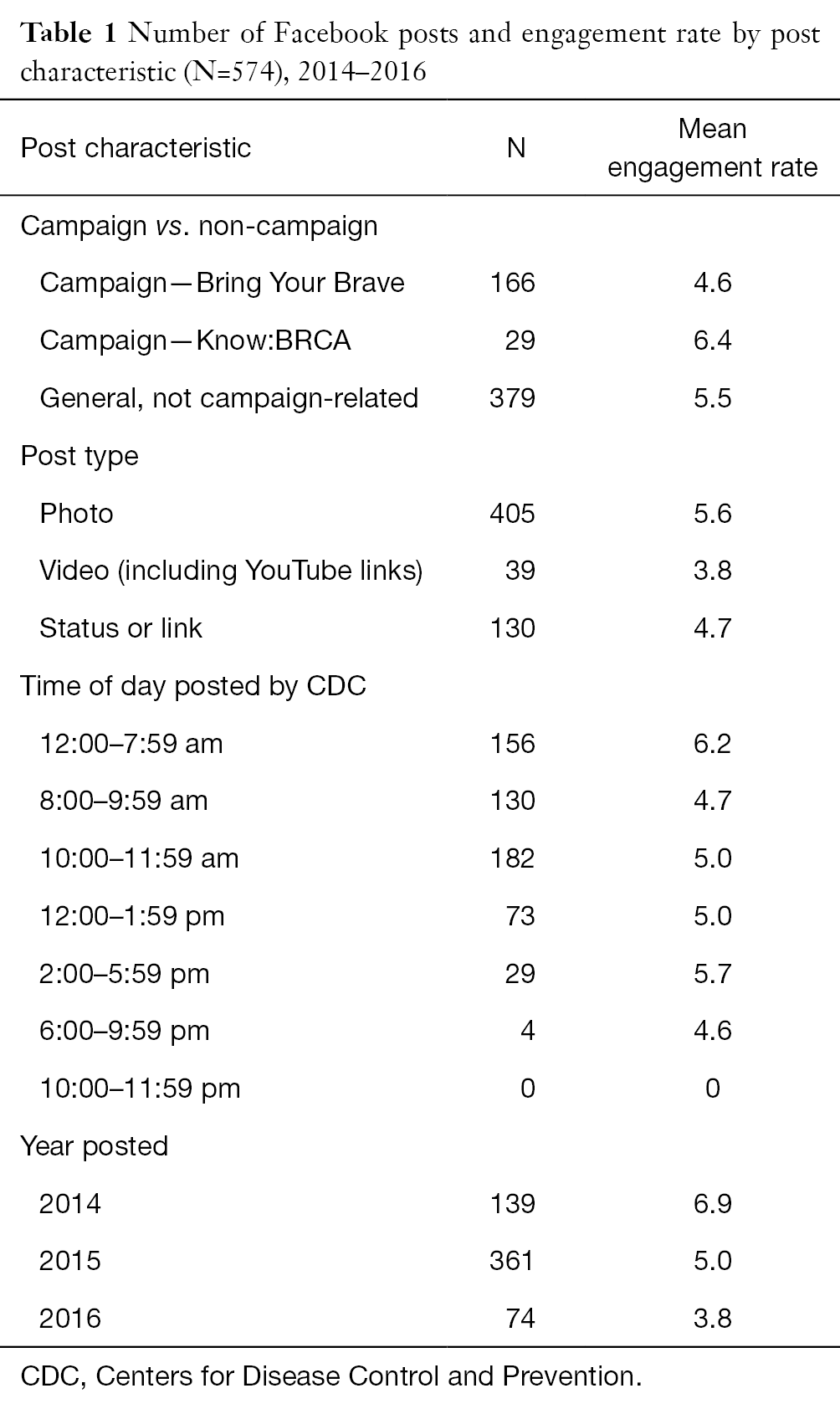 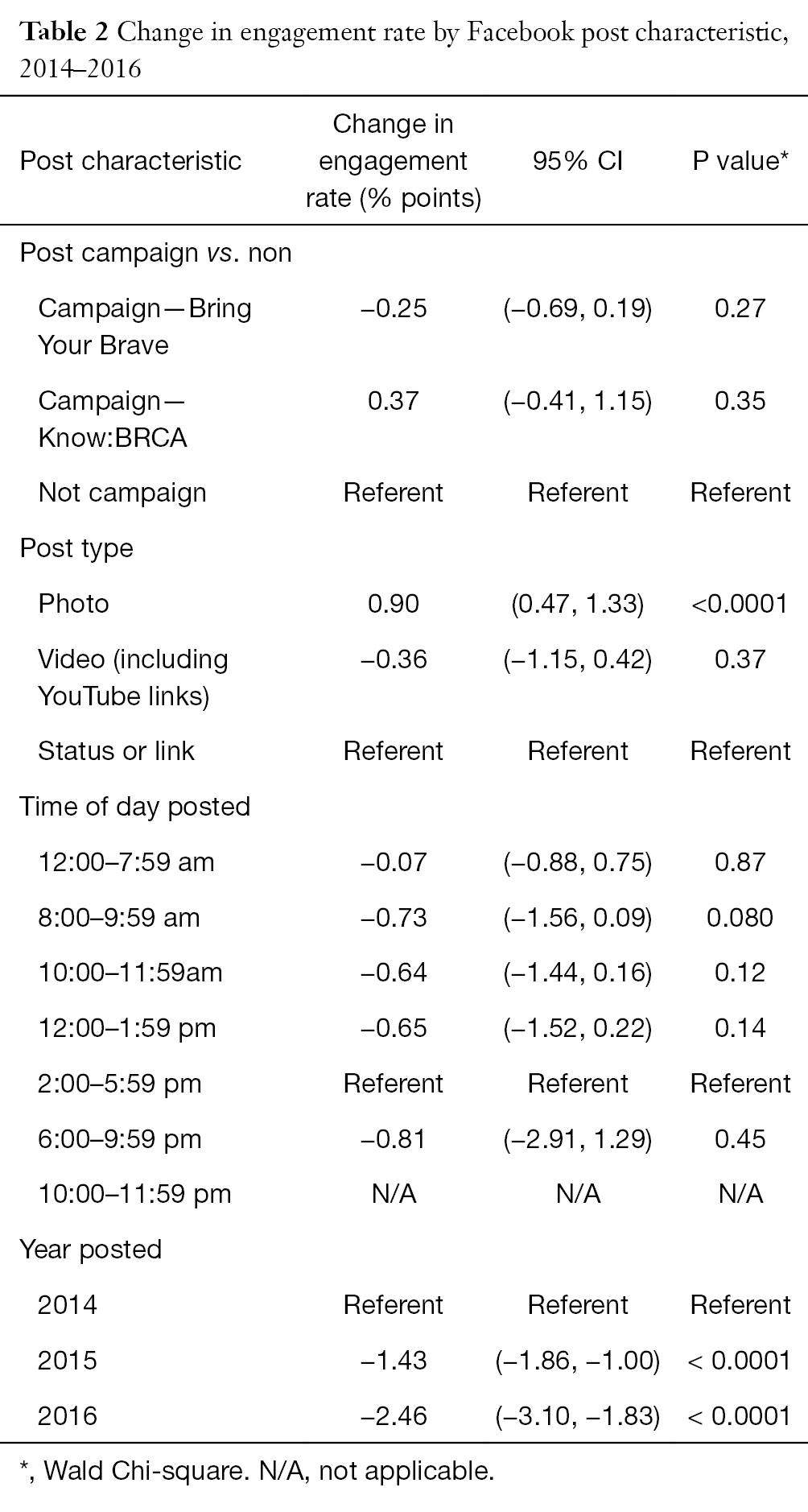 Without parsing out Know:BRCA and Bring Your Brave content, there was still no significant difference between campaign-specific content and general, non-campaign content. Photos continued to have a significantly higher change in engagement rate than other content types (Table 3). 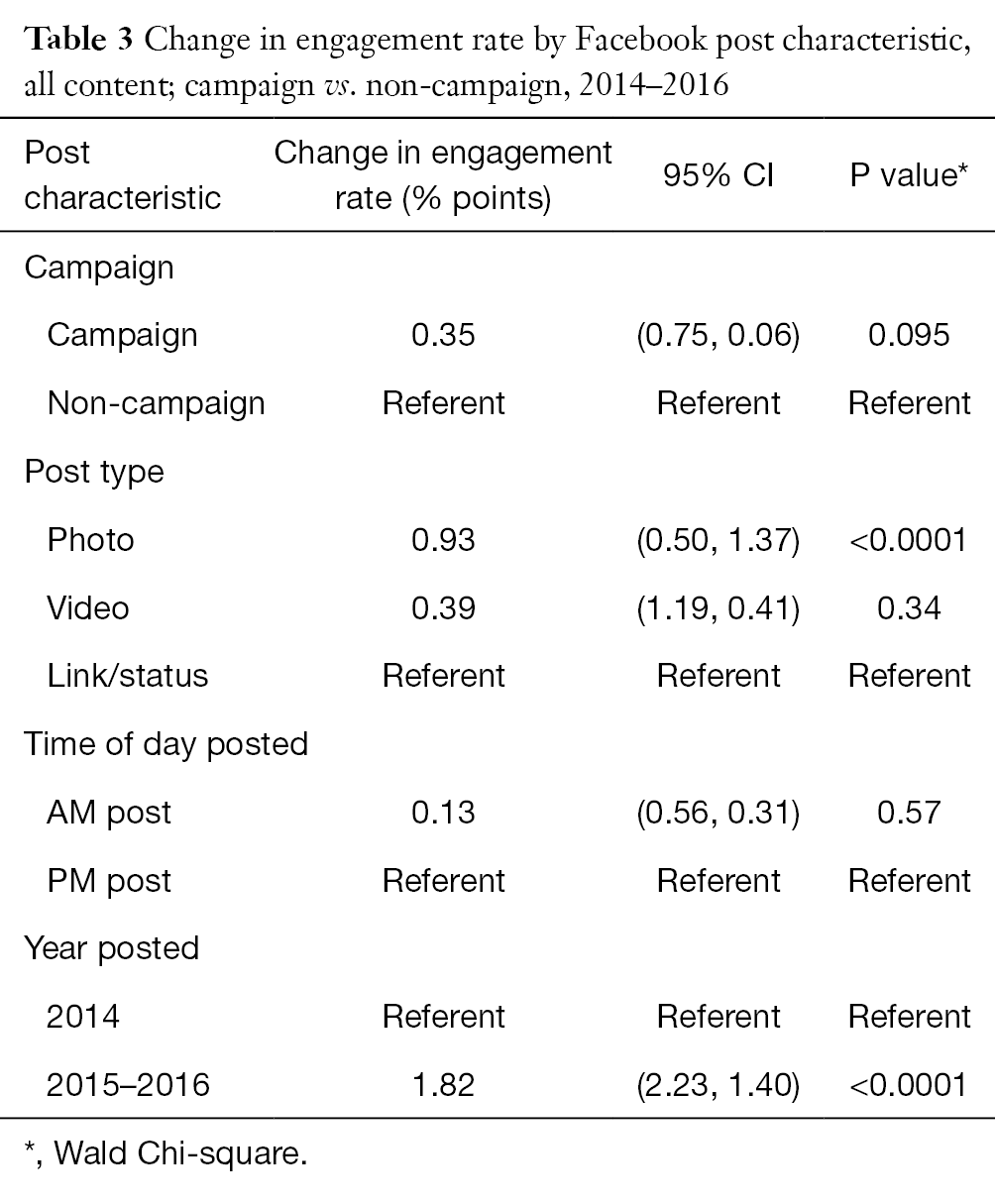 Within the Know:BRCA campaign specifically, no significant difference was observed in the year posted (Table 4). Yet within the Bring Your Brave campaign, photos produced a significantly higher engagement than all other content types (Table 5). The same was true for non-campaign, general breast cancer content (Table 6). 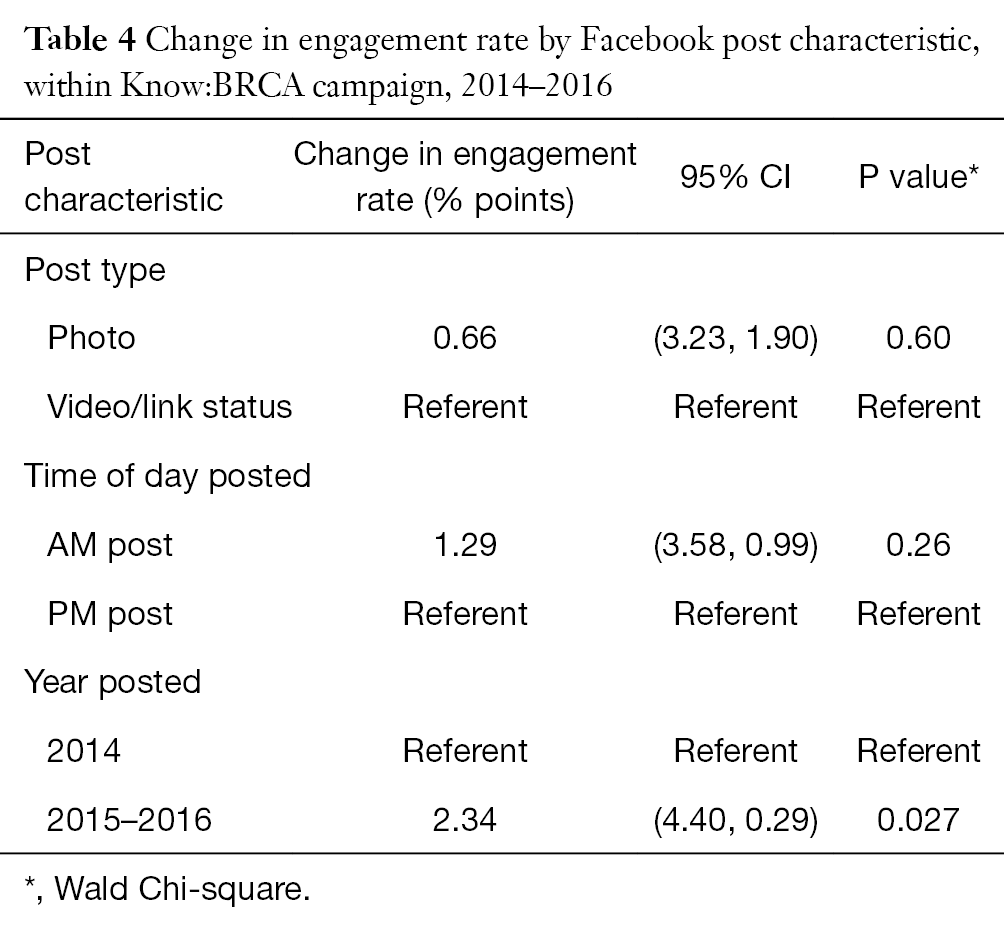 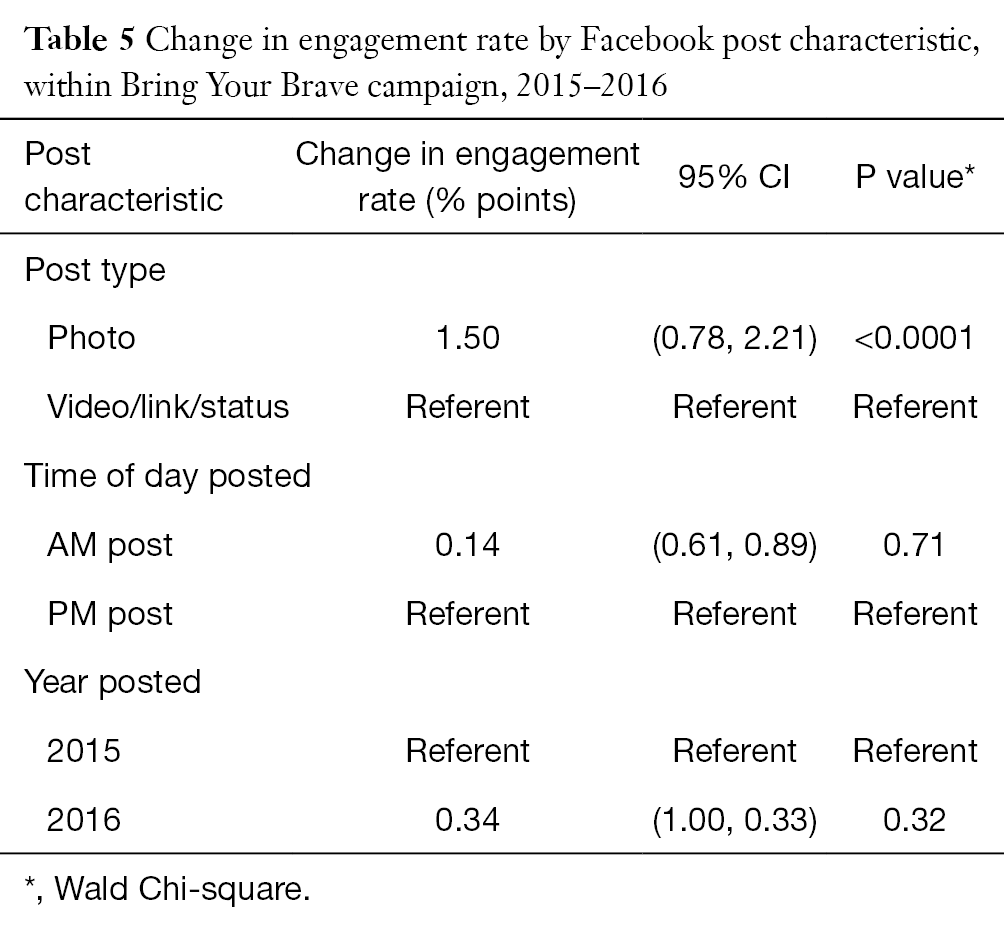 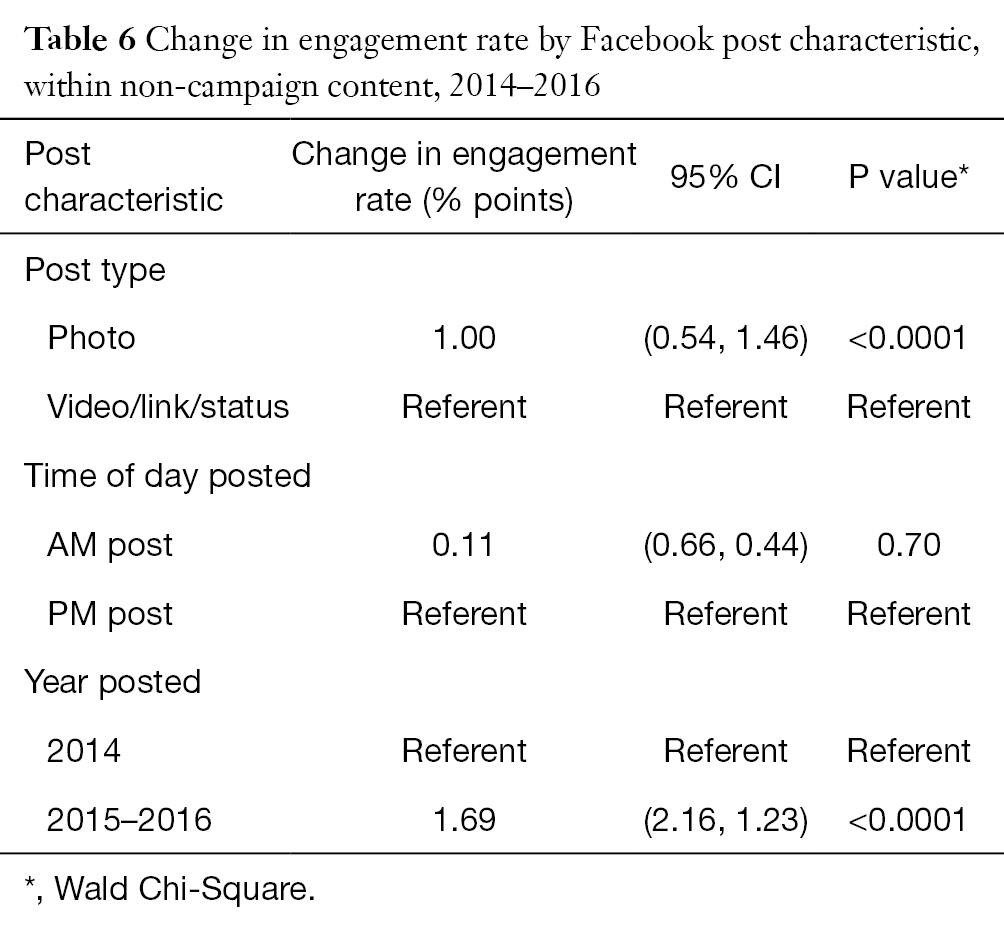 The findings from this study suggests that factors such as content/media type affect user engagement. Within each campaign and among non-campaign content, photos produced the most significant engagement rate, meaning that users were most likely to engage with photos on CDC Breast Cancer’s Facebook page. While the overall number of users reached increased for posts from 2014 through 2016, we did not find that engagement changed meaningfully during this time. Engagement rate seemed to be highest on average for content posted by CDC between 2 and 6 p.m.

Our study showed that photos produced a significantly higher engagement rate, meaning users were more likely to click, share, comment, or like the content of the post. These findings are similar to those reported in the trade literature (17,18). Our study also showed that while content that was specifically related to a campaign was not significantly associated with change in engagement rate, there was a significant association of content type and year posted with engagement rate. Specifically, those photos were significantly associated with engagement rate. These data suggest that highly visual content may be more effective in facilitating engagement in public health social and digital media campaigns. This knowledge will assist public health practitioners in developing targeted health messages and potentially enhance engagement with selected audiences.

Prior public health campaigns have used social media as a component complimented with other more traditional media, such as print products (1,4), however, few have utilized social media-only formats to deliver campaign messages. The novelty of this format has limited the number of published studies to help ensure its efficacy as a public health communication method. Thus, there is little empirical evidence regarding the impact and utility of social media on health promotion (1,2). The dearth of evidence is due in part to the lack of innovative methods for analyzing campaign-generated data. Despite this, the emergence of digital health campaigns, like Bring Your Brave and Know:BRCA which focus on discrete and targeted audiences may have significant impact on health marketing and communication (2,6). As Web 2.0 and social media make the communication landscape increasingly participatory (10), the need for innovative methods for assessing the effectiveness of this communication method for health messaging has increased. Our study used novel methods to assess the impact of certain social media content characteristics on user engagement and thus contributed to evidence regarding the utility of this communication method.

The association between year and engagement rate makes the case for further evaluation of engagement as it may be related to changes in Facebook’s timeline algorithm. For example, in 2015, Facebook changed the way page content was presented on a user’s timeline (19). Priority was given to a user’s “friends” and paid advertisements. Overall reduction in engagement rate may have been impacted by changes in the Facebook algorithm that controlled how and when Facebook page content appeared in a user’s Newsfeed. Among trade publications and the social media community, it has been noted several times that Facebook changes in its newsfeed algorithm have led to decreased engagement overall (20,21).

These results should be interpreted according to the following limitations.

While engagements as defined for Facebook (clicks, likes, comments, and shares) do illustrate that visitors are taking in and sharing content, it is not clear if this led to changes in behavior (conversations with family or healthcare providers or further research).

The Bring Your Brave and Know:BRCA campaign content specifically seeks to create awareness and change or improve behaviors that occur offline, for example with a healthcare provider. As there is a lack of data on these offline conversations and behaviors, the complete understanding of the effectiveness of CDC’s Breast Cancer content cannot be fully assessed.

Finally, some cell sizes in the analyses were too small for individual analysis, requiring that they be combined with other strata (e.g., status updates and links).

Future studies could include qualitative assessments or surveys about our content in order to fill the gap in understanding the effect of the campaign materials. Future studies could also look further into year-over-year differences, and explore effectiveness of this content across other social media channels.

As the campaign continues, Bring Your Brave will adjust both its use of free and paid social media channels to best reflect what resonates with the target audience. Because of the immediacy of social media versus more traditional media that require longer-term planning (such as magazines or television), it is possible to quickly adjust the course of a planned media placement and use the ongoing input to tailor messages and presentation.

Disclaimer: The findings and conclusions in this report are those of the authors and do not necessarily represent the official position of the Centers for Disease Control and Prevention.